Help Me Crack the Code 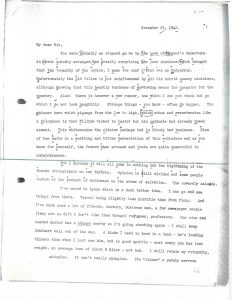 Gestapo Chief Klaus Barbie, “The Butcher of Lyon,” was closing in and Virginia Hall had to escape by crossing the snow-capped Pyrenees in the winter of 1942.  She made the grueling trek with her prosthetic limb she nicknamed “Cuthbert” only to be arrested and thrown into Spanish prison for illegally crossing the border.  Virginia was carrying vitally important intelligence information the Allies needed.  How would she get it out of prison?  She wrote a letter, in code, and had it smuggled out.  This is the letter.  Help me break it!