Staying in the Shadows 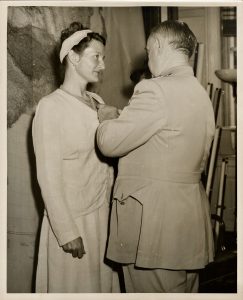 Virginia Hall received the Distinguished Service Cross from OSS Chief William (“Wild Bill”) Donovan during a private ceremony in September 1945.  Originally, Donovan wanted President Truman to present the award but Virginia feared the ceremony would make the news and reveal her identity as a spy. She had plans for future clandestine work.

The Distinguished Service Cross is the military’s second highest award and is given for, “extreme gallantry and risk of life in actual combat with an armed enemy force.”  Virginia was the only civilian woman in the Second World War to receive the award.