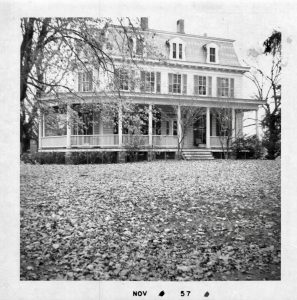 To escape the summer heat of Baltimore, Virginia’s parents, Ned and Barbara, purchased a home on 110 acres in Parkton, Maryland.  Box Horn Farm had electricity and water but no central heat.  After Ned’s tragic death in 1930, the family moved to the farm permanently.  Virginia’s niece, Lorna Catling, remembers the home had a pot-bellied stove, “But it wasn’t comfortable.  You’d roast in the front and freeze in the back.”

A Place for Refuge and Recuperation

Box Horn played an important role in Virginia’s formative years.  It’s where she roamed the woods and developed her love of nature.  After she lost her leg in a hunting accident in Turkey in December 1933, Virginia returned to the farm to recuperate. It’s at Box Horn where she learned to walk again with a new wooden leg she nicknamed, “Cuthbert.”  A year later Virginia returned to a new position with the State Department in Venice, Italy. (photo courtesy of Lorna Catling) 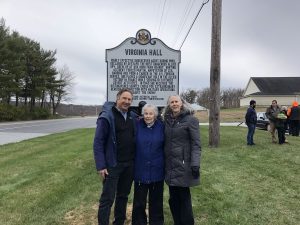 While Box Horn Farm was torn down to make way for road construction, a historical marker was erected near the place where the home stood. Here, I’m standing with Lorna and Linda Catling (Virginia’s relatives) at the marker’s dedication ceremony.