Baltimore’s Virginia Hall: The Making of a Spy 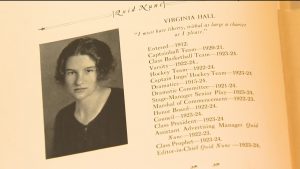 first began in the archives of my former employer, the CIA.

My first thought: Were there clues in Virginia’s childhood that predicted her success as a spy?

The Roland Park School yearbook showed young Virginia a good but not exceptional student –but she had a passion for leading: class president, editor of the school newspaper, captain of the field hockey team.

And Virginia also loved to act in school plays; assuming the role of someone else was perfect training for an espionage agent. “She always played the pirate chief,” her niece, Lorna, said.

She was “the most original”–the “class prophet”–said her yearbook. As a prank, Virginia brought a snake to school, wrapped around her wrist like a bracelet. She was rebellious–quit Barnard and the Radcliffe after refusing to take required classes, including gym. Nothing daunted her, said Lorna, calling her Aunt Virginia, “a little scary.”

Leading a Life of Espionage

Early in 1941, London was in ruins from German bombs and US diplomats thought the British cause was lost. With its back to the wall, British Secret Intelligence was looking for secret agents to send into France: risk-takers who broke the rules.

Virginia was a good match and was recruited for a very special mission–to be the first resident spy behind enemy lines in Vichy France.