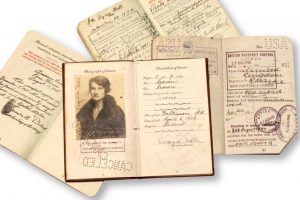 After resigning from the US State Department in May 1939, Virginia stayed in Europe. Perhaps looking for new meaning in her life, she took a position with the French Ambulance Service and when the Nazis invaded France in May 1940, she helped to shuttle war wounded from the front line to a hospital near Metz. In June, when Paris fell, Virginia escaped to London—itself in flames from German bombs.

Many US diplomats thought the British cause was lost but Winston Churchill planned not just to repel the enemy but retake the European continent. The Prime Minister created a secret espionage organization, the Special Operations Executive (SOE), to send spies and saboteurs behind enemy lines to “set Europe ablaze” from within. Still, the learning curve was steep. The France Section of SOE used Michelin Guides to learn about the country’s geography and terrain.

Virginia: A Risk-Taker with a US Passport  Becomes a Spy

SOE was looking for people with on-the-ground experience; risk-takers who knew the region, could speak French, German, and Italian and had nerves of steel to work effectively in lethal situations.

Virginia possessed all the qualifications and more, but there was one attribute that set her apart and made her a most attractive candidate spy: She was an American and held a US passport.

The US wasn’t in the war yet and still had diplomatic relations with Vichy France—so Virginia could travel throughout the region and ask probing questions of government officials, observe, and report back to her spymasters in SOE. For all of these reasons, the British gave Virginia a very special mission, code-named Geologist-5: Virginia Hall would become the first allied spy to live behind enemy lines in Vichy France.

Between 1941 and 1944 the British sent 39 women into France. Thirteen did not return. They were executed on the spot, tortured brutally, or died in German death camps.