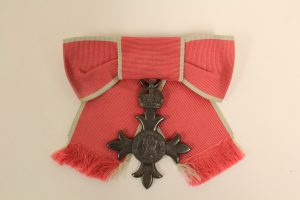 (Courtesy of Lorna Catling and the Spy Museum, Washington, DC)

An Honor with a Mixed Message

Virginia deserved being awarded “Member of the British Empire,” (MBE) in July 1943. She had just escaped from France and her espionage saved countless lives.

But the public spotlight of the MBE could blow her cover and end of her career as an undercover agent.

Virginia believed the MBE was the British equivalent of a “gold watch”–the capstone of her career. But she wasn’t through with France. She felt tremendous guilt for leaving her agents behind and needed to return. Besides, she desperately wanted to be part of the final chapter in the liberation of France.

“It is only because I honestly believe that the Gestapo would also know of your return  . . . that I say no… You are too well-known in the country and it would be wishful thinking believing you could escape… and we do not want to give (Klaus Barbie) even half a chance by sending in anyone as remarkable as yourself.”

“My neck is my own… and I’m willing to get a crick in it because there’s a war (going on)…”  Buckmaster’s letter did not provide the last word. Virginia Hall did return to France with the American Office of Strategic Services.

A preference for the shadows, not the spotlight.

There’s no record that Virginia took the MBE medal, citation, or met with the King while the war was raging on the continent.

Virginia was not motivated by honors or awards and though by war’s end she received many accolades, she always demanded private ceremonies, with only one or two others in attendance.

“Hall of Mirrors,” has been called: