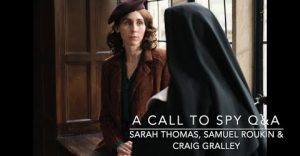 Of course, I said, “Yes!” when Sarah Megan Thomas asked me to serve as a guest host and join her and actor Samuel Rukin to discuss “A Call to Spy” at the East Bay Jewish Film Festival. I told the audience about my research on Virginia Hall, America’s greatest spy of WWII, and my book, “Hall of Mirrors.” Early in the film’s development, Sarah called CIA and I was asked to provide insights into Virginia Hall’s personality and career in espionage.

Festival directors, Riva and Efi, were great and by all accounts, the audience enjoyed the fast-paced banter, too. Sarah and Samuel took questions for the first half-hour and I, for the second (beginning around 30:10). It got a bit wild when some questions from the audience strayed from the film and toward my career at CIA.

“A Call to Spy,” is a ground-breaking film. In an industry dominated by men, the movie is about women, created by women, showcasing the talents of three gifted women actors. Here, Sarah Megan Thomas deserves much of the credit for bringing the story to life: besides starring as Virginia Hall Thomas wrote the screenplay and produced the film, directed by Lydia Dean Pilcher. “A Call to Spy,” is the first film to highlight the wartime espionage of Virginia Hall.