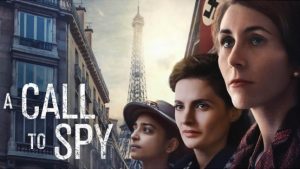 A CIA psychiatrist told me in a recent interview that movies can help you build resilience to adversity. “Movie-goers see hardships and heroism, and think, ‘Maybe I can be brave, too.’”

In other words, seeing “A Call to Spy,” could be good for you.

The movie follows the arc of these heroic lives and is filled with historically accurate and agonizing moments. Perhaps the movie’s most poignant—and accurate—was portrayed by Apte (as Noor Kahn) facing a Dachau firing squad. Just before the trigger is pulled, Noor shouts one final word: “Liberte!”

Yet, “A Call to Spy” isn’t intended as a history lesson. Like many war films depicting true events and people, this film brings characters together in a fictional way to advance the storyline—and this gives actors the latitude to explore and interpret the personalities of their characters. While another actor might have played Virginia Hall as a bold, inscrutable, hard-bitten spy (Hall’s niece called her Aunt Virginia, “scary”) Thomas plays Hall as a bit more accessible—an inwardly-focused woman with a spine of steel, fully capable of scaling the Pyrenees, yet able to display emotion. Exceptionally fine performances also are offered by Katic as smoldering and taut Atkins, and Apte, a soft-spoken but determined Noor.

The movie is heralded, rightly, as a groundbreaking achievement for the film industry. In a business dominated by men, “A Call to Spy” is a movie about women, created by women, showcasing the talents of three gifted women actors. Here, Sarah Megan Thomas deserves much of the credit for bringing these heroic stories to life: besides starring as Virginia Hall, Thomas wrote the screenplay and produced the film, directed by Lydia Dean Pilcher.

But thinking about this movie purely in gender terms misses a larger point. “A Call to Spy” transcends gender by telling us that heroism crosses all boundaries of race, religion, disability, and gender. To wit, if battling the Nazis weren’t enough, each woman had her own personal struggles: Atkins, a Jewish emigree fought for British citizenship; Kahn, an Indian Sufi, wrestled to reconcile the war with her pacifist background; and Hall struggled against Nazism through the pain of physical disability.

“A Call to Spy,” doesn’t have a storybook ending but then real life often doesn’t have one either. But perhaps more important than the story is the film’s message: The courageous actions of these real-life women can help us build resilience for tomorrow, too.

Full disclosure: I provided assistance to Sarah Thomas and participated with actors of A Call to Spy in a recent California film festival.