Meeting people. That’s been the reward of writing Hall of Mirrors. 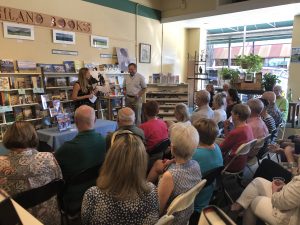 I’ve helped students write reports on the life of Virginia Hall. I’ve reviewed new manuscripts on Hall from well-known authors; spoken to community groups, libraries, museums, Rotary Clubs, book stores, and book clubs. And even former colleagues at the CIA and the National Reconnaissance Office asked me to talk about America’s Greatest Spy of WWII.

Her life story is compelling because it is both deeply personal and broadly universal. It’s about how a disabled and disregarded woman refused to be relegated to a life of small expectations. How through sheer grit and determination she worked through the physical trauma and self-doubt to make a lasting contribution to the liberation of France.

But perhaps Virginia’s greatest gift is to each of us.

Virginia has given us a window into our own lives. She’s taught us the importance of using the hard knocks of life as a platform for reaching higher. And how we should look to peoples’ abilities, not their disabilities.

And be sure to take advantage of the limited time, special offer for the Amazon Kindle e-book version of Hall of Mirrors.