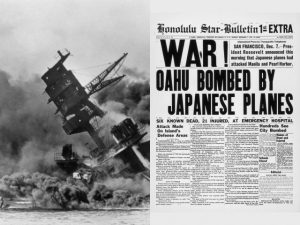 The US Enters WWII

“We should not be wiped out!”

British Prime Minister Winston Churchill said the Japanese attack on the US naval base at Pearl Harbor was, “The greatest day of the most horrible war.” The war had been going poorly for the Brits. Now the US would join the fight, which bolstered Churchill’s outlook. “We should not be wiped out!” he said.

American Virginia Hall was spying for British intelligence in Vichy France. She was relieved the US was finally in the fight but it would complicate her life. She could no longer use US neutrality as a shield when traveling through France. Americans would be placed under greater scrutiny by the German military and French secret police.

Faced with greater danger, Virginia tightened her personal security. She wrote her last article for the New York Post in January 1942 and postmarked it, “Somewhere in France.” Then she changed residences from Lyon to the Hotel de la Paix in the capital, Vichy, and began using the name, Brigitte LeContre on her “official” documents.

Virginia sent a coded message to London in early January telling her spymasters that letters addressed to her had stopped arriving since America entered the war. Coded letters, frequently used secret writing or other enciphering techniques were an important method of communication between London and its agents in WWII France.